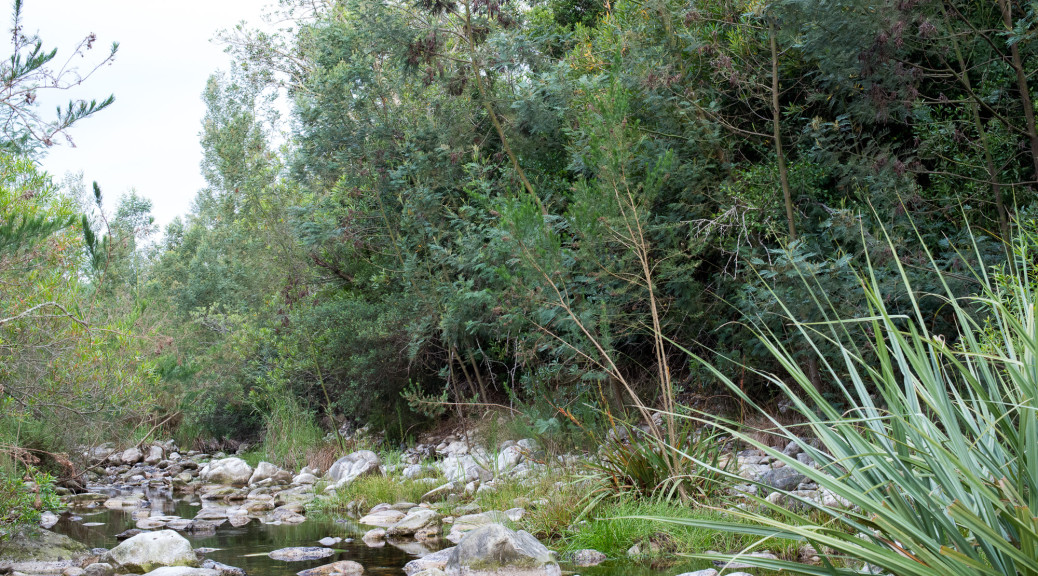 Every morning I awake torn between a desire to save the world and an inclination to savour it. This makes it hard to plan the day. But if we forget to savour the world, what possible reason do we have for saving it? In a way, savouring must come first (E.B. White)

“But Louis,” I remonstrated, “Look behind you. There’s a forest of black wattles.”

“Well I have pulled out seven of them.”

Louis and I were tending a small herd of goats alongside the Caledon River, which joins the Buffeljags to flow past the former mission village of Zuurbraak, Suurbraak or its original Attaqua Khoikhoi name !Xairu  meaning ‘A place called Paradise‘ in the Overberg region of the Western Cape Province in South Africa.

Gaunt, testy – but with a twinkle in his eye signalling a heart of gold, my good friend, Louis de Villiers, is an inveterate kampvegter (champion) for the environment. He therefore walks the talk, which is why he was tugging away at a black wattle while all I wanted to do was enjoy the evening watching the goats graze.

In South Africa, the black wattle tree (Acacia mearnsii) is classified as an invader, which ‘competes with and replaces indigenous grassland and riverine species … (thus reducing) the grazing area for domestic and wild animals.’ (Invasive Species South Africa).

The forest of black wattle in question was growing on the lower slopes of the Langeberge and was now also invading one of the few remaining thickets of original vegetation that, inter alia, included  Kaapse boekenhout and wild almond which, incidentally, was sustaining our goats. Chastened by Louis’ example I undertook to do the same. However, I am ashamed to confess that since that day, I failed to uproot one single black wattle.

That event took place on 27 July 2015. Almost a month later on the 17 August I received a visit from Gari whose plot adjoins the stretch where Louis uprooted his 7 black wattles. Gari shared his concern that not only black wattle but the goats were destroying the natural vegetation alongside the river, which he informed me he was planning to conserve as a retreat for anyone wishing to relax there. Part of his plan was to rid the area of black wattle. The second part of his plan was for the area no longer to be used for grazing, and would I mind?

Tragedy of the commons

Matt and Sasha (my son and daughter-in-law) and the other livestock farmers of Suurbraak grazed their goats, cattle and horses on that same stretch of commonage years before Gari and others moved onto their plots. Sharing the commons is also a large troop of baboons, which periodically come down from the mountain. Consequently there is huge pressure on whatever land remains – exacerbated by plant invaders (black wattle, blue gum, hakea, and pine).

Clearly the stage is set for the tragedy of the commons. What’s to do, particularly as there is clearly a need to conserve what little is left?

As I see it, Louis has demonstrated the solution: seven black wattles: ‘The challenge,’ Louis explains, ‘Is to find the balance between our way of doing and living, while recognising and respecting the delicate balances in nature in which we are interfering.’

Had I, therefore, as intended, followed Louis’ example set on the 27 July 2015, there would have been 224 fewer black wattles. But I had done nothing. So If I needed grazing for the goats, while valuing biodiversity and beauty I realised I must stop pretending all is well with the commons and I must do something to conserve what is precious.

My commitment, therefore, is that whenever and wherever I graze the goats –including that stretch – I would pay my dues by pulling out the equivalent of seven black wattles. Yesterday I started working on my backlog and uprooted 60 black wattles. Added to Louis’ seven, equals 67 fewer black wattles. Tonight, at least seven more.

Acknowledgement: Louis shared the quote above by E.B. White, which he says sums up his dilemma.

Afterword: While visiting, Louis also took out a grove of hakea, which will be the subject of a forthcoming post: a how-to get rid of hakea.