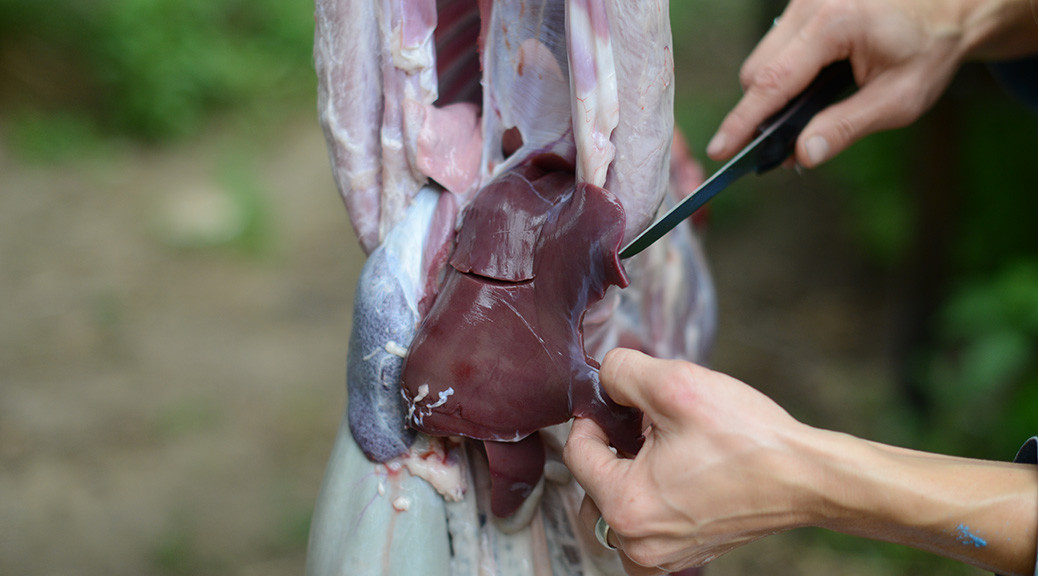 My intention is to clarifying for myself why I eat meat.

The question was shaped by a discussion I had via Twitter with Jo Lister,  Bento, GrassConsumerAction,  Free Ranger and @EGalgut (account closed and apparently subsumed into Bento), and via  The Daily Pitchfork with James McWilliams, Janet Schultz and Charlie Talbert.

The vegan position as I understand it

Jo Lister and Bento, both vegans, believe that because humans as a species know right from wrong, we have a moral obligation not to inflict suffering on animals because, like us, animals are sentient. Consequently, they refuse to participate in any exploitation of animals be it by eating meat, wearing animal products or using animals for entertainment in zoos and circuses. Humans who do mistreat animals are, as James McWilliams observes, guilty of speciesism. Bento and McWilliams reject as illogical the argument that eating meat is natural by invoking the naturalistic fallacy. A call to veganism is compellingly and movingly articulated in the movie Earthlings.

I am wary of bringing morals into the question

I don’t know about you, but I have a kneejerk reaction to anyone telling me that for moral reasons I should not eat meat. It’s not just that I’m obstinate. It’s that I’m suspicious of anyone playing the moral card, because in my view any injunction, rule, practice or belief that is at heart an ‘ought’ instead of an ‘is’ doesn’t gel with me, as being too easy, pat and/or empty. To be anything other than who I am, cuts me off from my true nature which, let’s face it, is seldom if ever moral, let alone compassionate. Instead, I believe it is necessary to enter and live what is real. By ‘real’ I include my shadow, suppressed self. It also requires me to open myself to what is on the other side of my thought bubble. This means participating in a world which is immediate, fluid, complex, fraught, and with no easy answers. (I expand on this position in, Enter).

For me, the speciesism argument is patronising and coercive

Speciesism is what happens when one species (human) assumes for itself power over another (animal) thus resulting in exploitation. It’s a thought-provoking take on what is happening on earth. Nevertheless I am concerned and suspicious when – like with many –isms: speciesism starts being used as a stick to beat others as in: ‘There’s a lot of confusing unique behaviors and speciesism in this comment thread.’ (McWilliams). This bears out my sense that –isms polarise and stratify into us (the enlightened) and them (the speciesists), and in the process demand specific behaviours which, ironically, are subtly demeaning. For instance speciesism assumes human-animal interaction in terms of omnipotence and powerlessness, which then legislates specific human behaviours such as compassion, whereas in my experience the interaction between human and animal seldom operates within such narrow confines. In fact I have been in awe when in the presence of animals and at other times, comforted. I have felt loved. I have learnt to show respect. I have shared with animals and have received two, three, four-fold in return. I have experienced intimacy. And I have felt afraid. This is why Janet Shultz’s sense of ‘coexistent presence’ speaks to me so powerfully, by re-defining the relationship in a way that promotes dialogue and understanding.

When I justified eating meat ‘… because it is natural’:

@doyourlittle I slaughter from need and because it is natural. I don’t ‘want to’ slaughter | @GrassAction — Hendrik Jeremy Mentz (@dust2dust) February 2, 2015

Bento corrected me for being illogical, by invoking the naturalistic fallacy.

I had never before encountered the naturalistic fallacy until Bento mentioned it. McWilliams further elucidated the concept for me in his post, When It Comes To The Morality Of Meat, Nature Is No Guide’. As I understand the naturalistic fallacy, I cannot claim something is good on the strength that it happens in nature, for example claiming that humping in public is acceptable because animals do it. So if it’s illogical to say I eat meat because it is natural, and as my decision to eat meat results in alarm, fear, pain and/or grief for a member of another species why do I eat meat? Otherwise, Jo Lister’s observation to me holds:

Why I eat meat (hopefully, without resorting to the naturalistic fallacy)

It’s a long story. My mother turned to nature cure in my 14th year. Since then for much of my long life I have been vegetarian. Now occasionally I eat meat. The reason I now eat meat is because during my years as a vegetarian I felt much like the walking dead or catatonic. I lacked vitality. I was light-headed. I bordered on being perniciously anaemic. Therefore, I resorted to drinking pots of Keemun tea and, later in my life, double espressos and chocolate, all of which, because it was caffeine-induced, provided a false energy.

Now when I eat a small portion of meat my body immediately says thank you, I feel grounded and connected, and I have the strength to carry on. This dramatic contrast tells me that I had been vegetarian (and I’m not even talking veganism!) at the expense of my health.

There’s another reason. I manage a small agroecology farm in Suurbraak, South Africa on behalf of Matt (my son) and Sasha (my daughter-in-law). The farm is situated between mountain and a perennial river and bordered by wilderness. Because I do not see myself as separate from my context, I cannot avoid – nor do I wish to avoid, taking my cue from nature. Here my lived reality is an ecology in which life (baboon, rooikat or lynx, buck, otter, water mongoose, porcupine, horse, goat, cow, mouse, snake, owl, ibis, frog, wasp, spider, scorpion) is forever attacking or protecting turf in an attempt to stay alive for as long as possible in order to procreate. In what way am I so different? That I’m moral?

But I am also trapped in another context, human. I said ‘trapped’ because humans increasingly live almost entirely in their heads as if what is beyond their thought bubbles doesn’t exist, thus leading lifestyles that cause incalculable harm to the fabric of the whole of which humans form part. Take, for instance: CAFOs (Concentrated Animal Feeding Operations), fracking and nuclear waste. Therefore I believe you and I should find ways to re-connect with what is beyond thought. This includes not only connecting with wilderness but also our feelings, and the past, which we often try to fudge or forget. One way to connect with wilderness, the past and/or our feelings is to take absolute responsibility for every decision I make, including slaughtering for food.

It follows therefore that slaughtering must be personal. By personal I mean that I live my involvement in or my responsible for this animal’s death. And to make it personal I too must be prepared to slaughter at least once in my life so that I experience first-hand what is entailed for the animal and the person doing the slaughtering (see my post Eating Meat).

If this is not possible then the act of buying, preparing and eating meat must happen in full consciousness, relatively speaking, in so doing acknowledging the death of the animal I am eating.

I believe my responsibility also extends to ensuring that the animal I’m eating led a natural life as in free-range, grass-fed, horned and suckled. This will of necessity push up the price of meat. That is as it should be, see: ‘Our responsibility towards the animals I farm’. This requires that I check the label before buying my meat. But because labels also lie or fudge the truth (See James McWilliams’ article in Harpers: Nature’s perfect package, Labeling our way to a clear conscience (paywall)) we need food activists such as GrassConsumerAction and Free Ranger to help us hold retailers accountable.

Ideally the animal I eat should have been slaughtered with the minimum of trauma. Unless I am a farmer or know a farmer who slaughters and whom I can trust, the killing side in modern society will remain problematic. As one farmer put it – reported, I think, in ‘National Geographic’: ‘My animals lead a good life with one bad day’. This I must accept.

My beef with vegans for being pie in the sky

I didn’t set out to be confrontational as I have the utmost respect for the manner in which vegans live their beliefs. But at the same time vegans, like meat-eaters, should be answerable.

If vegans had their way, the question then follows: would we have farm animals? And if the answer is no then surely their noble quest to prevent the slaughtering of farm animals would mean that they wouldn’t have been born in the first place, thus depriving them of life.

In addition to food, the animals we farm help build quality soil via their droppings. My sense is that without farm animals we would be another step closer to ceding control to the fertiliser, herbicide, GM corporations to create an artificial environment, which they then control.  Apropos, is this TED address by Allan Savory: How to fight desertification and reverse climate change.

Thirdly, on the question of epistemology: it appears that vegans assume a dualistic world comprising 2 discrete contexts/realities/worlds but equal – to avoid speciesism: wilderness and human. If so we have the classical dilemma of explaining how these two worlds interact without falling into what Gilbert Ryle called a category error, which in this case might be the anthropocentric assumption that compassion and abstinence from killing are more appropriate than, for instance, contentment from being nourished.

Fourthly, is the naïve, lopsided belief that given the right circumstances, tools and/or attitudes we should and could rid the world of pain – without realising that it is often through pain, terror, grief (all the supposed negatives) that we connect with life.

Matt, my son, who reviewed the first draft, pointed out that I might run into problems having promoted an argument based on anti-thought and pro-feeling, and then tackling vegans at the end in a very logical fashion thus not identifying the complexity and feeling of living the vegan way. This, I concede is a valid criticism. To Matt’s critique I add that of my friend and co-reviewer, Louis de Villiers, who observed that everyone has to decide for him or herself.

2 thoughts on “Why I shall continue eating meat”