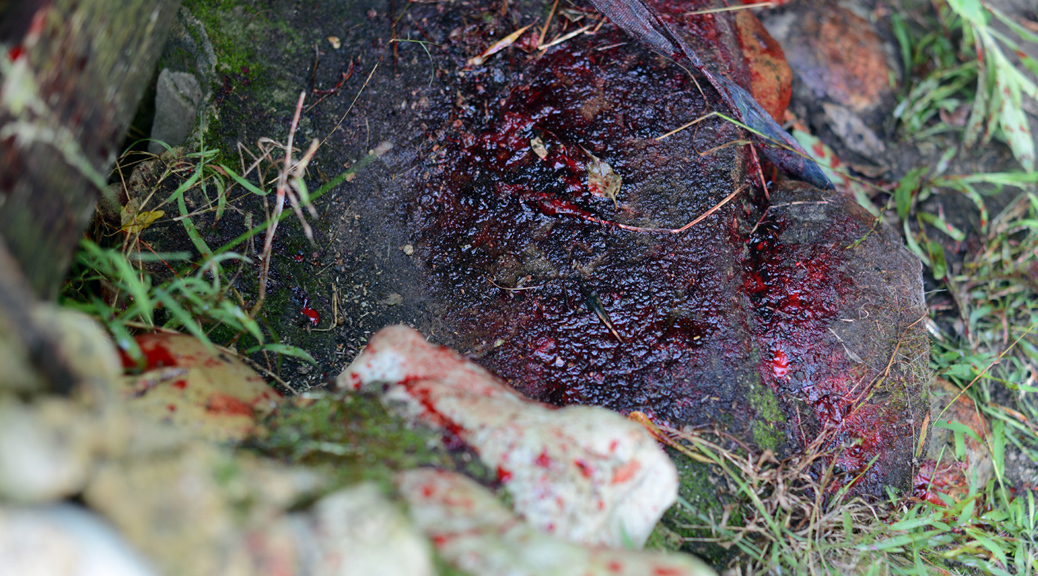 “Dad, there’s never a good time,” Matt explained, “because they trust you right to the end.”

I am looking after my son and daughter-in-law’s small, off-grid farming operation in Suurbraak. Since taking over the operation, their 3 mother goats have each given birth to 2 kids. The other day Sasha (my daughter-in-law) returned for a few days. On one of these she slaughtered one of the male kids.

Some years earlier, Matt (my son) woke me in my tent, pitched on their then, newly purchased Suurbraak plot with the question, “Dad, whose turn is it to slaughter the goose?”

I did the deed as I realised that it was hypocritical of me to share their meals without playing my part. Ever since I have been glad I accepted Matt’s challenge, because it meant I had paid my dues with respect to eating meat. Additionally it confirmed for me that, done properly, animals accept their death in a way that we also need to do.

How I did it was to catch the bird, carry it in my arms to the fence nearest the river where I told it what I intended to do. Initially the bird protested but afterwards it grew quiet and the trees, river, mountain, bird and I merged. I then knew it was time. Sasha held the bird’s neck on top of the chopping block where it lay without moving until — several attempts later — I severed the head with an axe.

I was moved and humbled as my actions had been true to my philosophy, which is not to shy away but to enter every situation which presents itself. Based on my most recent experience, however, I now realise that that event, although epiphanic at the time, was betrayed the moment I dishonoured it by neatening and packaging it into my philosophy thus becoming slick, complacent and arrogant.

This time round was different. I had been present when Kashka, the mother-goat, gave birth. Over the months I had dealt with diarrhoea among the newly-born, waves of ticks and goat politics. We all knew one another’s measure. We had a routine. They all trusted me. We were a team.

Sasha and Matt have a policy that when either slaughters, the other is not present. “It’s easier, that way,” Sasha explained. Consequently, I heard and didn’t see what happened. It was early morning. The mother kept calling.

“Dad, there’s never a good time,” Matt explained, “because they trust you right to the end.”

Before she stepped out to do it, I looked carefully at how Sasha was handling the situation. Her face was set like porcelain. She appeared a million miles away, locked into her own moment. She took a last gulp of her espresso.

I don’t think it was my imagination that after the killing the barnyard was in shock. All the goats had turned their backs on me. They chewed the cud and gazed into middle distance. Later Kashka came to me to ask. For days she kept looking. She kept calling.

“Of course,” Sasha confirmed, “but she will accept.”

And she has. The gash that rent the whole has closed as if nothing happened. But at times I still feel the incompleteness.

A few days after, Matt, Sasha and Enzo (their not yet one-year-old son) travelled to their smallholding on the other side of Sedgefield to spend a few days camping. Matt wanted to catch a fish for Enzo, which, he managed to do, just before nightfall.

“I walked back with it in my pack,” Matt shared. “It didn’t want to die. It must have listened to my footsteps. When I got to the tent, I gashed its brains with a knife. Killing is never easy, Dad. We cooked it on the coals. It was good.”