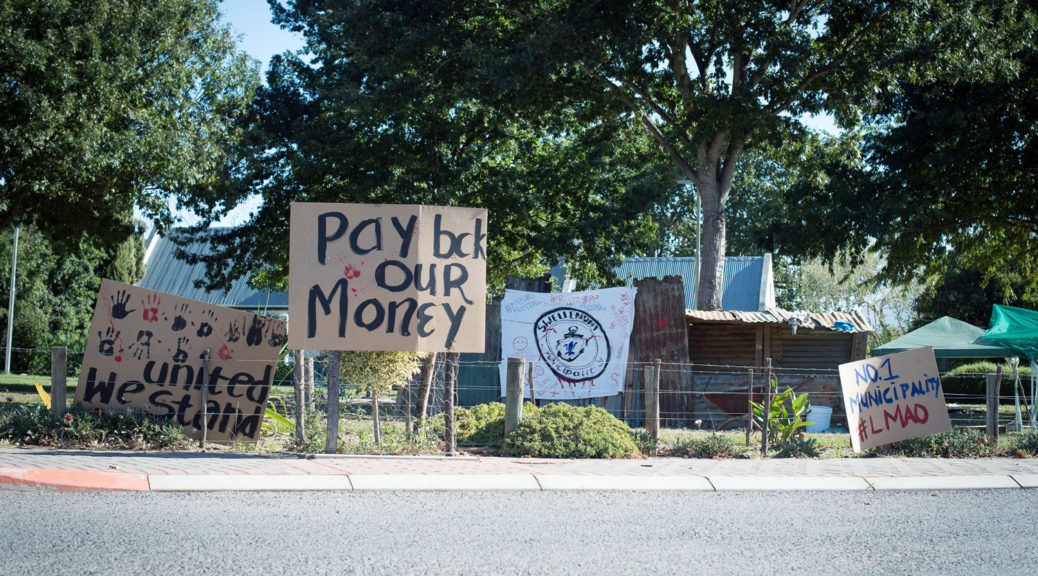 A demonstration is planned (at 14:00 on Sunday 7 May 2017) on the Suurbraak braak (village green) to which the press has been invited in order to protest the non-delivery of housing because (as I understand the talk) of alleged routing of sums of money meant to be utilised for Suurbraak (an ANC-controlled ward) for use in Swellendam (run by the DA), to the detriment of the people of Suurbraak, and of housing.

Insinuations along similar lines were levelled during a report-back called by the Swellendam mayor, Nicholas Myburgh, on Monday 24 April 20917, to respond to a range of Ward related issues (see an earlier post).

Yesterday afternoon I took a look see, was warmly welcomed by members of the Birds of Xairu who, when asked who was the boss and from whom should I seek permission to take pictures, replied that the community was in charge and that I was welcome to take these pictures of preparations for Sunday’s protest:

Preparations for the housing protest in Suurbraak

Housing protest in Suurbraak. Myburgh is the mayor for the municipality of which Suurbraak is a ward

On of the structures forming part of the housing protest in Suurbraak.

Housing protest in Suurbraak (translation: my mother who was waiting for a house has now passed away. RIP)

Building their structure in preparation for housing protest in Suurbraak

I’ll be attending the mass meeting on the braak.

2 thoughts on “Housing protest in Suurbraak”