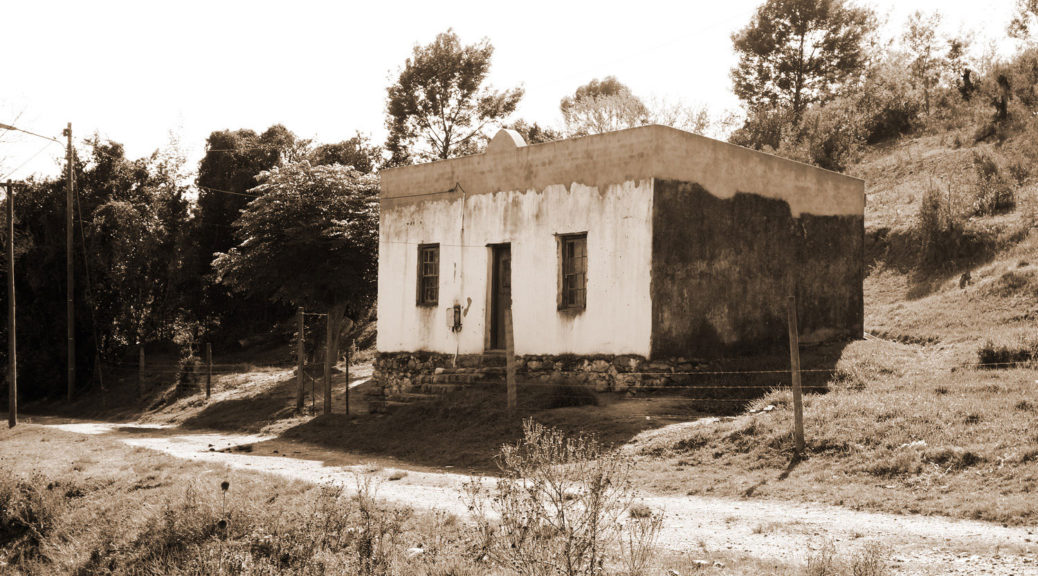 After prayers the meeting immediately turned ugly when Myburgh laid down the rules: only three questions allowed for each point on the agenda, the meeting would end promptly by 21:00, if we didn’t abide by these rules he would pack up and drive off.

There was an immediate outcry slamming Myburgh’s attitude. Somewhat chastened, Myburgh adopted a more conciliatory approach although his persona slipped at times within a context where it appeared that there was at least one individual present whose goal seemed to be to stoke emotions.

The dark mood of the meeting constellated around five issues: heritage, services, oor die rivier (over the river), housing and fluisteringe (whisperings)

There were repeated references to Suurbraak’s heritage. For instance, the aforementioned gentleman complained about hideous Eskom electricity poles which he believed detracted from the character of Suurbraak. Heritage or precedent underpinned many of the other issues raised, as in: this is the way it has been for generations why these incursions, fences and/or rules?

On complaints from certain ratepayers about the two municipal picnic spots, the municipality apparently tightened their procedures and, in the process, have antagonised large sections of the community. This anger again erupted during the meeting. A second service-related issue were hiring costs for the community hall, and dissatisfaction that the hall needed also be cleaned afterwards.

There was unhappiness about the allotments on the other side of the Buffeljags River which had for generations been regarded as commonage for grazing and recreation and which were now being sold – by members of the community, Myburgh reminded the meeting – and fenced off. For instance, the question was asked: can someone own (by fencing off) a waterfall?

My sense was that the majority was there to hear about housing, so when Myburgh announced that there was no longer money to build the promised 180 plus houses and that, instead, only 30 houses were to be built and that these would be allocated to the elderly and those with disabilities, and that the remainder would only be receiving serviced parcels of land (sewerage, power point and water), there was an outpouring of disbelief, disappointment and anger.

Despite numerous interruptions what I did manage to piece together from the reply of the municipal official who manages the housing portfolio are the hurdles before land can be expropriated. These include: EIAs (environmental impact assessments), terrain (some of the sites identified proved to be unsuitable as they were too steep therefore alternate land needed to be identified), and protocols (for instance, the names selected for housing had first to be advertised for comment).

There were insinuations of corruption (money earmarked for Suurbraak has been appropriated for Swellendam). When raised Myburgh looked confused, mentioned that the municipality had had a clean audit for the past two years and asked the aforementioned gentleman suggesting the allegations to bring him written proof and he would investigate. Another person in the audience got up and mentioned three sums of money, but before Myburgh, his director of finances and a third man (all three of whom had gone into a brief huddle in front, I assume,  to confer)  could reply there was a howl from a core group at the back of the hall (as if, I guess, to suggest collusion). This group then staged a walkout thus effectively shutting down the meeting.

Communication: A hallmark of the meeting was that the residents were adamant that they would be heard thus leaving little opportunity for Myburgh and his team who had been lined up to respond to complaints and queries to be heard. This, I felt, was an opportunity lost because rumours doing the rounds weren’t able to be countered and a general sense of discontent still prevails. It waits to be seen how Myburgh will now deal with these rumours and the discontent.

Canary in the coalmine: During the meeting I thought to myself that if there was this level of discontent in the top municipality in the country, what mustn’t be welling up elsewhere in South Africa.

The micro is in the macrocosm: What was also reaffirmed for me was that Suurbraak is a local instance of global problems: joblessness, tragedy of the commons, land grabs, agroecological farming versus global corporate agribusiness, the haves and the have-nots, gentrification, and that because most of these problems are intractable, our planet is in trouble.

Danger: certain individuals – perhaps working in concert or perhaps not – give me cause for concern, because deep down I fear that he and/or they might not have the community of Suurbraak at heart but is/are, instead, fabricating or inflaming issues for his/their own or factional ends. I do not deny that there are real issues – one being gentrification – but why, for instance, if housing is an issue, complain about the aesthetics of Eskom poles and why insinuate and ask questions without waiting for the reply?

The poorest of the poor: Finally, and this is for me the big worry, is the question: why are there now insufficient funds for housing? My unavoidable conclusion is that funds that should have been available for the poorest of the poor have, instead, been squandered, for instance: the Arms Deal, Nkandla, Sassa, Prasa and the mooted nuclear deal, and that all our futures are now imperilled.

5 thoughts on “Canaries in the Suurbraak coalmine”