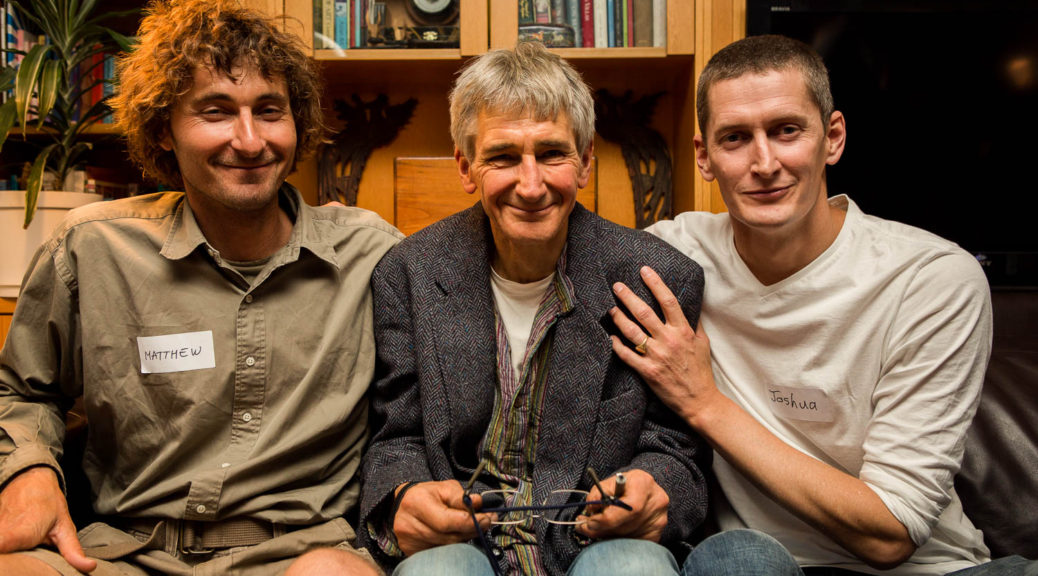 ‘Enter’ saw the light of day almost a year earlier but when the Book Lounge declined to include the book in their launch programme the books remained in their boxes under the bench in the lounge for close on a year.

What finally prodded me into action was the realisation that unless I held the launch before the imminent permanent departure from Cape Town of my eldest son (Matthew our first-born) and his family I would have difficulty ever finding another opportunity to launch the book. But where?

Fortunately Joshua (our second-born) and Rowena Quinan (his spouse) came to the rescue and offered their beautiful home in Camps Bay, with an almost 360 degree view of the 12 apostles and the Atlantic ocean.

Sasha (Matt’s spouse) took on the task of managing the whole process in my absence – as I live in Suurbraak, and my good friend Malcolm Doyle-Davidson (Club African Day wines) arranged a generous sponsorship of some excellent reds and whites courtesy of Eugene Kinghorn of Saxenburg wine estate. The presenters (see below) all agreed to help launch the book, the invitations went out and those who accepted arrived.

Lia met and registered the guests at the door. Josh and Rowena’s house started filling up. Josh gathered everyone around for the inputs which Oscar O’Ryan, when approached at the very last moment, kindly agreed to video:

Oscar’s footage has been edited and the Afrikaans translated into English and uploaded to YouTube. Additionally each speech was transcribed and summarised. To access the videos, transcriptions and summaries please click here.

Below are pics of their presentations (to view the full-sized image click on any image and use the arrow keys left or right. To escape click ‘x’ top left or hit your ‘Esc’ key):

Penny reading from Paul Ashton’s introduction to the book: “Many of us live in a state of disconnection from our whole selves ” | photo credit: Ken Barris

Ken Barris: “… so Hennie I think you also have to look into the heart of lightness as well as the heart of darkness.” | photo credit: Tony Carr shooting with film (non-digital)

Joshua Mentz: ” …there’s a narrative in the book of where we as a society are in association with our psyches” | photo credit: Ken Barris

Each presentation built on its predecessor. In the audience: a sense of solemnity and of care and love were apparent see below (to view the full-sized image click on any image and use the arrow keys left or right. To escape click ‘x’ top left or hit your ‘Esc’ key):

Rapt attention during one of the presentations: Judith Whiteing | photo credit: Ken Barris

Alan Schmidt and Charl de Villers (partly obscured in the background) in pensive moods during one of the presentations | photo credit: Ken Barris

Captured at the end of a presentation are Ingrid Alberts and Louise Cokayne | photo credit: Oscar O’Ryan

Sasha Mentz-Lagrange capturing moments during one of the presentations | photo credit: Ken Barris

A strikingly sad photo of Norval Geldenhuys looking at the camera. Also in the photo are Carel Trichardt, Petru Wessels, Malcolm Doyle-Davidson and Carin Geldehuys

Oscar O’Ryan being photographed for a change. To his left is Jaywant Parbhoo and to his: Riaan Eyssen (partly obscured) and Inez Wales

Rapt attention during one of the presentations: Ighsaan Francis | photo credit: Ken Barris

John van der Hoeven and Desiree Bick, each in his or her own space during one of the presentations | photo credit: Ken Barris

After the presentations Malcolm plied everyone (our Muslim brethren, Ighsaan and Redewan, and our teetotallers excluded!!!) with wine, Rowena passed around the snacks and helped Sasha invoice copies of the book. I signed.

Below are pics of some of those present  (to view the full-sized image click on any image and use the arrow keys left or right. To escape click ‘x’ top left or hit your ‘Esc’ key):

Perhaps an example of what Ken Barris in his talk referred to as ‘transgenerational something’: Iñaki Mentz with his grandma: Janice Mentz | photo credit: Tony Carr shooting with film (non-digital)

Rowena Quinan, Ms Precision IT Consulting, and the mommy of the house | photo credit: Ken Barris

I’ve already mentioned how the evening would not have been as huge a success that it was without such a beautiful venue (Rowena and Joshua), launch manager (Sasha), reception (Lia), Oscar agreeing at the very last moment to capture video footage of the proceedings (find his contact details below), a warm yet crisp and firm anchor man (Josh), a strong team of presenters (Penny, Ken, Josh, Matt and Llewellyn), something I would never have thought of: a sound system (Llewellyn – find his contact details below), volunteer photographers (Oscar, Ken, and Tony Carr who went all retro, non-digital, shooting with film), a wine part-sponsorship organised by Malcolm (to order wine see his contact details below) to bring down costs.

‘Enter’ has now officially been launched thus confirming that I am blessed to be related to and friends of what must be the some of the most interesting, generous, warm, loving and kindest people in this world, each of whom I thank humbly for kindness and support in what for me was an extremely difficult birth.

Enter has gone on to win a South African Independent Publishing Award in the philosophy category. My thanks to Ken who alerted me to the award by putting me in contact with Darryl Earl David of UKN (University of KwaZulu-Natal) who manages the awards. Darryl’s contact details are below if you want to be put on his festival mailing list or have an indie-book in the wings.

I believe we should support one another in the same way I was supported and so below I’ve listed the contact details of those who helped me – in case you ever need a related service: