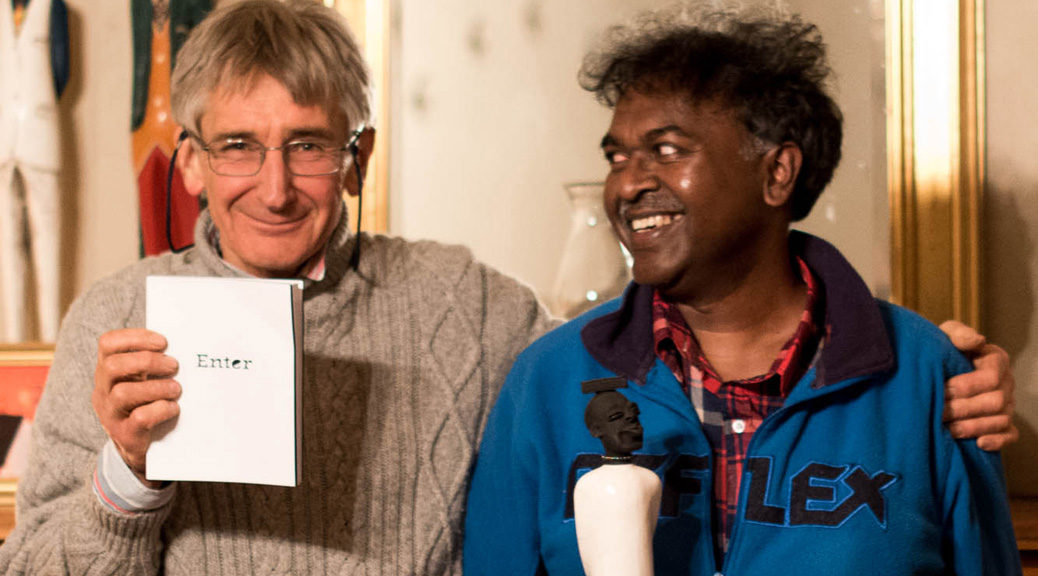 Friend and writer, Ken Barris, put me onto Darryl Earl David, language lecturer at the University of KwaZulu-Natal and initiator of a number of literary festivals that are helping keep reading, writers and publishers alive in South Africa.

Darryl had earlier put out a call to indie writers who had published in 2015 to submit their work for consideration for a South African Independent Publishing Award. The closing date was little more than a week away and so I dispatched my book post-haste.

What a pleasure meeting a bunch of interesting, unpretentious, solid, down-to-earth people: writers and publishers who, like I, had decided to go it alone.

Below are some pics of the festival (to view the full-sized image click on any image and use the arrow keys left or right. To escape click ‘x’ top left or hit your ‘Esc’ key):

Leanne Mitchell (far right) on the night that she received an award for her biography of the artist, ‘Eleanor Esmonde-White’

Elize Cookson, editor and Linda Reinstorf, author of ‘The Wild Horses of the Kaapsehoop Escarpment’

Peter Baker (left), co-initiator of Booktown Richmond chatting to participants in the festival

What also surprised and delighted me was the quality of the publications, all of which could have stood shoulder to shoulder with anything that the major publishers had produced thus confirming my conviction that if you believe in something, then make it happen.

Below are indie authors whose books I couldn’t resist purchasing:

Linda Louw who won an indie-publishers award in the photographic category for some of the most haunting photographs I have ever seen, in her The Wild Horses of the Kaapsehoop Escarpment, edited by Elize Cookson, whom I also met at the festival.

Tree Aloes of Africa by Ernst van Jaarsveld and Eric Judd published by Wynand van Eeden’s Penrock Publications, which specialises in the botanical field, and that won an award for a meticulously researched, beautifully presented work in the field of botany captured lovingly between book covers.

As you can see in the feature image used for this post (photo credit: Linda Louw), Enter also won an award in the philosophy category.

What helped ‘Enter’ win the award, I believe, was the professional quality of the physical book itself, thanks to book designer Doret Ferreira of dotted line design. Accolades are also due to Stefanie Swanepoel who served as editor and proofreader, web application designer, Dustan Franks of WordPress Ninja and a relentless team of hyper-critical readers: my two sons, Joshua and Matthew, a good friend, Louis de Villiers, and Fred. Thanks are also due to RSA Litho who reprinted and bound the book at their own cost after the pages in the first imprint came loose from the cover.

I had conflict as to how to go about selling copies during the festival. Should I have them on continuous display on a table at the front like some authors had done or should I wait for people to approach me, hopefully having had their interest piqued during my half-hour presentation during the festival? Near the end after I had only sold two copies: one to Wynand who asked me for a copy and the other to Linda, because I had bought her book, I decided to leave a pile on the front table of the lecture room in the hope of last-minute buyers. When I retrieved my unsold pile I saw that, instead, it had become a prop stand during David Butler’s live performance of Herman Charles Bosman (see the pic of the performance in question, below), which ended the festival.

I took this as a message: no hard sell, instead remain true to the book’s being-ness and allow organic processes to take their course, in the assumption that each book is meant for a particular reader and that the process of finding those readers cannot be rushed. Trust the process and (in the words of Fred to whom the book is dedicated) “do nothing.”