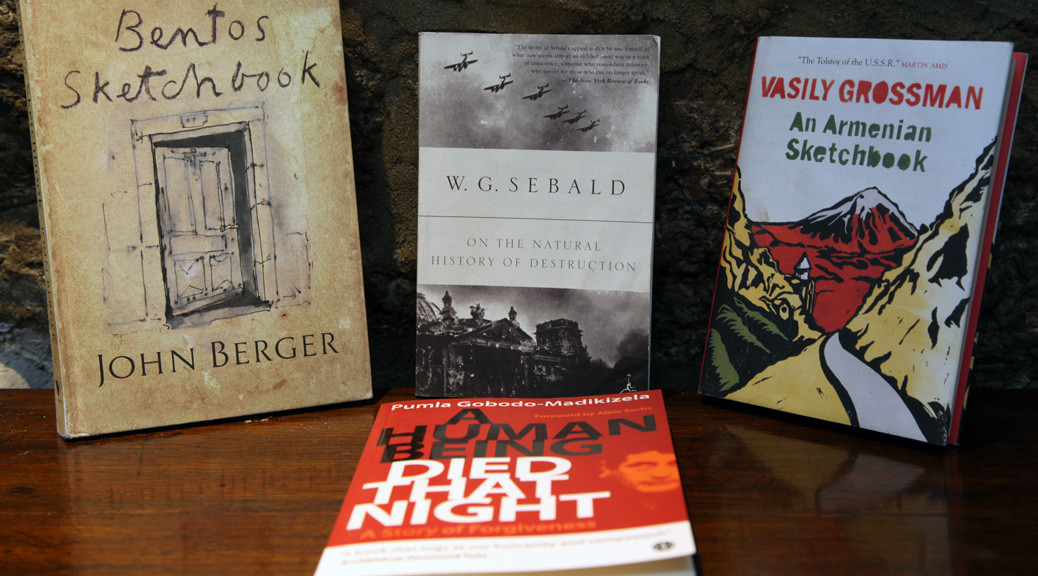 My concerns are a deadness consuming our planet, and tyranny. I believe the two are related, in that at their core is the human species, you and I. Deadness and tyranny take many forms but come about mainly because I disassociate by failing to own the actions that flow from who I am, and for what I stand. Consequently I live entirely in my head, being unable to feel anything. The extracts quoted below speak in their individual ways to these themes.

Many white South Africans here and abroad, still do not own their complicity in Apartheid but, instead, conveniently project it onto someone else like, for instance, Eugene de Kock (“Prime Evil”) whom Pumla Gobodo-Madikizela writes about in the quote below from the above-mentioned book.

Eugene de Kock, or ‘Prime Evil’ as he was called, is currently serving a 212 year sentence for crimes against humanity in terms of his role as head of Vlakplaas, a unit tasked to assassinate perceived enemies of Apartheid <Wikipedia: Eugene de Kock >

I was angry that the same society that had created de Kock, that had accepted his murderous protection of their privilege, had ostracised him and were now standing in judgment of him. | Gobodo-Madikizela, Pumla (2003:34) A Human Died that Night. David Philip. Cape Town

Grossman, in the quote below is writing about Joseph Stalin’s stature on a hill above Yerevan that was subsequently removed and replaced by the Mother Armenia statue. <Wikipedia: Mother Armenia>

Initially, the citizens of Armenia ‘hysterically worship(ped)’, and, when the tied changes, ‘totally reject(ed)’ Stalin.

My attempts to say a word about Stalin’s role in the creation of the Soviet State were in vain. My companions would not concede that he had played even the slightest role in the construction of heavy industry, in the conduct of the war, in the creation of the Soviet state apparatus: everything had been achieved regardless of him, in spite of him. Their lack of objectivity was so glaring that I felt an involuntary urge to stand up for Stalin. This absolute lack of objectivity might be said to resemble nothing so much as the lack of objectivity these same people had shown during Stalin’s life, when they had been so supremely worshipful of his mind and strength of will, of his foresight and genius. Their hysterical worship of Stalin and their total and unconditional rejection of him sprang from the same soil. | Grossman, Vasily (2013:28) An Armenian Sketchbook. Maclehose Press. London.

W.G. Sebald – On the Natural History of Destruction

Sebald, in the quotation below condemns the way that Germans and, particularly, German writers, have disengaged from the horrors inflicted on Germans by the Allied bombing raids and also the horrors inflicted by Germans on others, particularly Jews during the Second World War. He contrasts the works of the aforementioned writers with that of Jean Améry in the following extract:

It is this scrupulous restraint in his account of the torture he suffered that enables Améry to put forward a theory about what he still regards as the dark riddle of Nazi Fascism, one in which the common explanation of it as a national perversion has no place. He sees the practice of persecuting, torturing, and exterminating an arbitrarily chosen adversary not as a lamentable but incidental feature of totalitarian rule but, unreservedly, as its essential expression. He remembers “serious, tense faces [ . ] concentrated in murderous self-realization. With heart and soul they went about their business, and the name of it was power, domination over spirit and flesh, an orgy of unchecked self-expansion.” To Améry, the world devised and realized by German Fascism was the world of torture in which “man exists only by ruining the other person who stands before him.” | Sebald, W.G. (translated by Anthea Bell) 2003:153-4) On the Natural History of Destruction. The Modern Library. New York.

The dust-cover to Berger’s book states, inter alia, that ‘Bento’s Sketchbook’ is about ‘the pitilessness of the new world order and the forms of resistance to it’. In the section quoted below Bento sketches and then describes ‘the new tyrants’: 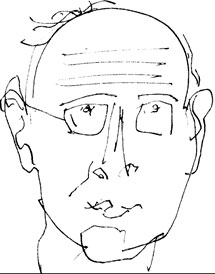 Study the faces of the new tyrants. I hesitate to call them plutocrats for the term is too historical and these men belong to a phenomenon which is unprecedented. Let’s settle for profiteers. Their profiteer faces have many features in common. This conformity is partly circumstantial — they possess similar talents and they live according to similar routines — and partly it is chosen as a style.

My diagram is based on men from the North. Obviously a portrait of a profiteer from the South would be different, yet I suspect the same tendencies would be apparent.
Their ages vary but the style is that of men in their late forties. They are impeccable, dressed and their tailoring is reassuring like the silhouette of high-security delivery vans. Armor Mobile Security.

Studying their features you have the impression that they have no pronounced, let alone excessive, physical appetites —apart from an insatiable appetite for control. Far from looking monstrous, their faces, although somewhat strained, seem almost bland.

They have foreheads with many horizontal creases. Not fur-rows ploughed by thought but rather lines of incessant passing information.

Small, swift eyes which examine everything and contemplate nothing. Ears extensive as a database, but incapable of listening.

Lips which seldom tremble, and mouths which take decisions implacably.

Their heads of hair, meticulously arranged as if for an aeronautic velocity test.
The assured confidence visible in their faces matches their ignorance, which is also visible.

You (i.e. Bento) described how there are three forms of knowledge. A haphazard form based on hearsay and impressions and never related to any whole. A knowledge, using adequate ideas, concerning the properties of things. And thirdly, a knowledge concerning the essence of things which add up to God.

The profiteers know nothing, but nothing, about either the properties or the essence of things. They are familiar only with their own impressions of their own rackets. Hence their paranoia and, generated by the paranoia, their repetitive energy. Their repeated article of faith is: There is no alternative. || Berger, John (2011:146-7). Bento’s Sketchbook. Verso. London.